I’m a big fan of The Food Network’s show, Chopped.  In case you aren’t familiar with it, the show has four contestants, four mystery basket ingredients, three rounds, three judges, and a host. The chefs open the baskets at the beginning of the round, and then they have a time limit to create whatever dish the round requires: appetizer, entree, or dessert. The judges look for creative uses of the basket ingredients, transformation of those ingredients, how well they are blended together for a composed dish, if it’s well seasoned, tastes good, and how well it’s plated. That’s a bit of a simplification maybe, but you get the gist.

Gamifying An Activity with Chopped

So why am I using my educational blog to chat about Chopped?  Simple. A student had a suggestion in the first semester that we take my Super Happy Fun Circle Time Friday and make it like the show, Chopped.  That sounded fun, but I couldn’t quite figure out all the pieces to that particular puzzle, until yesterday. Now when I say I figured it out, that means my students helped me. They have great ideas, so if you aren’t in the habit  of listening to your own students, consider starting…right…now.

So let me first explain my Friday activity.  This is also a student creation, so it in and of itself is worthy of mention.  Getting high school students to write is a challenge, and getting them to enjoy it can be an arduous task for teachers as students enter high school. Sure, there’s always a few who like to write, but the majority want to spend class time under the radar doing as little as possible.  Three years ago, I had a bright but challenging group of sophomores who were convinced that whatever they were talking about during class was more important than whatever the teacher (that would be me), had to say.  I had to change my teaching methods constantly to keep up with them. And then they came up with Circle Time.  It started as an activity where students put their desks or chairs in a circle, everyone starts with a piece of paper, and I give out three things: Who (protagonist), What (the problem), and Where (the setting). I actually take suggestions from the kids some days, and other days I come up with them.

Once those elements are established, I say “GO” and start the timer.  Students write for a minute, and then I say “Pass,” which means students stop right where they are and pass their papers either left or right, whatever we established during the directions.  I reset the timer and we repeat the process. Students write for one minute, continuing the story where the first author stopped, and the process continues until I feel it has been passed enough.  That number is arbitrary, so it can be four students to 8.  I always give the students a “heads up” that they are the second to the last person to write on this story, so they need to set up the ending. The final author of the story is the only author allowed to kill off the main character.  That may seem like a silly rule that isn’t necessary to state, but trust me, it is. Nothing kills a story vibe like being handed a story and the character is dead, but you only have one minute to write, so there’s little time to figure out what to do. The purpose of the activity is to get students writing…all students. There’s no sitting this one out.  I gave this activity a fun name, and even call it fun IN the name, and students love love love love it. 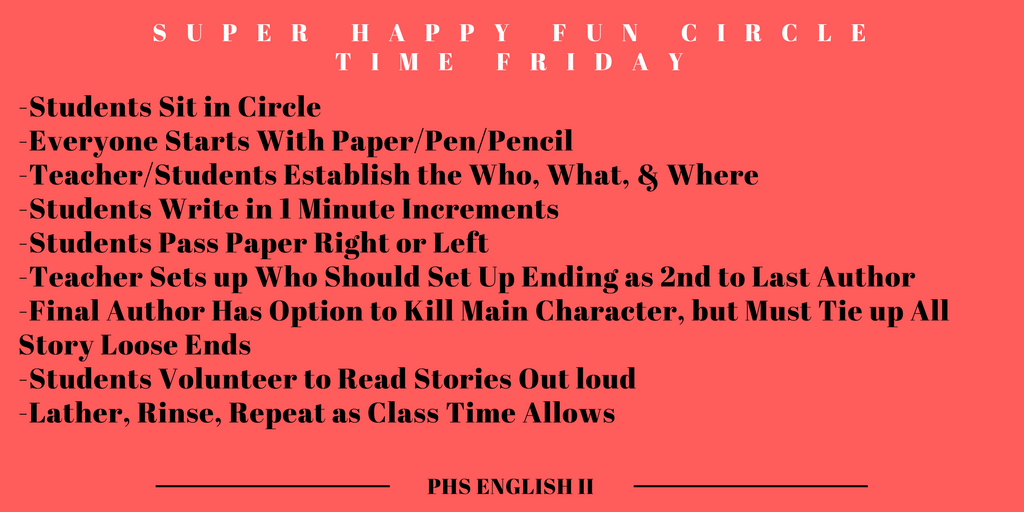 All of us have existing activities that could use a little spice or to mix metaphors, a face-lift. Try it with Chopped.  I will set up how we did it, and then try to help you connect the pieces to your own content.  For Circle Time-Chopped (the new name), my students organized themselves into four groups (the four contestants). Because I want this to be collaborative (so more like Iron Chef America in this respect), I had them all grab their Chromebooks.  One student in each group created a Google Doc and shared it with the others.  I had four “mystery ingredients” pre-selected, so  once everyone was ready, I announced the ingredients. If I had thought of it sooner, I’d have had a basket with the ingredients on paper inside that I could read to them, but I will have to do that next time.

Now, the four basket ingredients will largely depend on your content area, but keep in mind that in Chopped, the ingredients are not at all usual stuff. Oh no. Sometimes they are down right wacky, and students actually LOVE down right wacky stuff, so be mindful to throw in a wacky ingredient or two. My first basket contained: zucchini (the wacky element), alliteration, comedy, and a surprise ending.  The second basket contained: swordfish (the wacky), a metaphor, adventure, and a cliffhanger ending.  You can choose your own four that helps students go deeper into your content, learn to apply it, or learn to think strategically about your content.  The sky’s the limit, so to speak.

Now, like Chopped, forgetting a basket ingredient is not automatic grounds for being chopped, as long as another group had a more serious problem with their product. For example, I had a group forget to include a surprise ending, but their “dish” overall was well composed, had depth of flavor, and creatively used/transformed the basket ingredients.  Another group, however, used too much “pepper” so that it overpowered their dish.  The product hit really just one note of flavor and didn’t integrate the basket ingredients very well at all.  The judges and I had to “chop” them, so they had to then continue working on their research paper. They took it well, but I might add that watching judges “chop” competing chefs they don’t really know makes it look easy. “Chopping” students who worked hard (or not) is a different animal altogether, but so far, it has worked pretty well. They will get better at being okay with trying and “failing” and at collaborating if I continue to allow them to practice both, and I feel this activity does both in a super fun way. 🙂

So if you’ve never watched the show, it wouldn’t hurt to grab an episode or two. The judges always have a spokesperson who explains to the contestant why they were “chopped.” That person should be you or another teacher, since a student may not be able to articulate the reasons in a professional way. I mimic the actual Chopped judges in my comments, so that it is all about what makes a great dish.  Students know that if they survive a round, they must do even better the subsequent round, since the final judging is cumulative. The more you can bring in the intensity level of the show and the excitement, the better, so if you come up with ways to improve this for your own students, do it.  My students decided that instead of me announcing the “chopped” group, I should close the lid on the Chromebook submitted by the group being “chopped.”  That was fun.

This site uses Akismet to reduce spam. Learn how your comment data is processed.